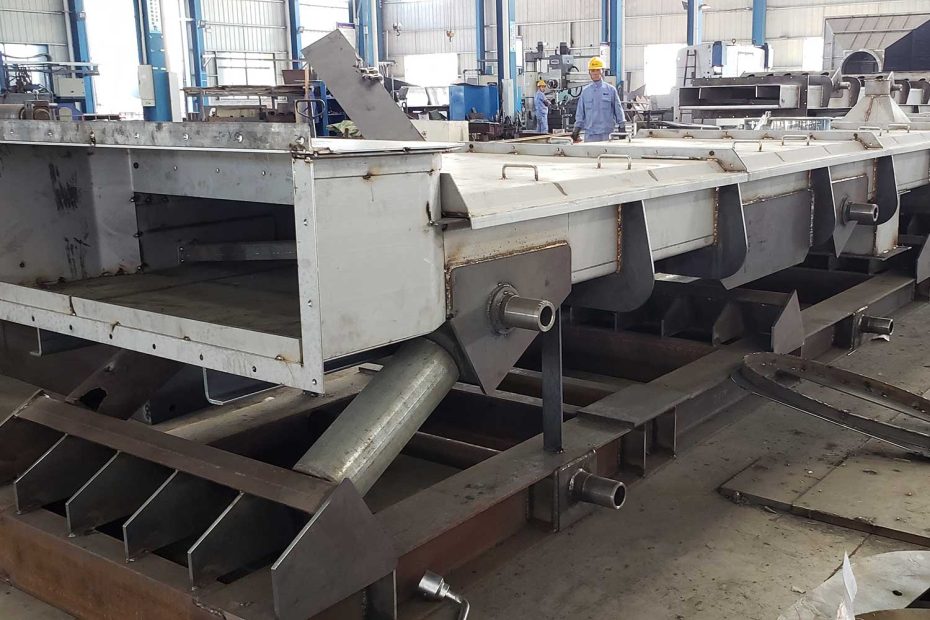 Vibratory or oscillating conveyors can be found in all types of industry, handling virtually any granular bulk material. They can be combined with other process functions, such as screening, cooling, drying and de-watering, while conveying. The conveyor can be covered and made dust-tight.

Vibrating conveyors are commonly employed in industry to carry a wide variety of particulate and granular types of bulk materials. The fundamental action of the vibrating troughs on the bulk material loaded on it is to throw the particles upward in the forward direction so that the material performs a series of short hopping movements and propagates at a certain speed.

Vibratory conveyors’ conveying components are often configured as pipes, cylindrical or conical drums, or rectangular channels. Due to the simplicity and dependability of this kind of construction, the carrier’s guiding mechanism relative to the frame or inertia is often built as a parallelogram.

The frames of vibratory conveyors / Oscillating conveyors are typically welded or cast and are often supported by rubber springs with reasonably high stiffness. In certain instances, frames are attached to the floor by stiff connections, such as screw anchors. No rubber sprigs are used in these instances.

Excitation is accomplished via eccentric motors or electromagnetic vibration exciters. External vibration exciters are rotors that are naturally unbalanced and may be linked to either the conveying element or the inertial mass. Typically, an electromagnetic oscillation exciter is attached to energize a spring. The split core is connected to the inertial mass on one side and to the conveying element on the other.

The oscillating motion is accomplished by specially designed inclined arms and an eccentric shaft driven by a motor through V-belts. The eccentric shaft is mounted on antifriction bearings and has V-pulleys at both ends with weights on them to counteract the unbalancing force. The rotation of the eccentric shaft provides a forward and backward motion to a connecting arm attached to the trough through a rubberized pin. The trough motion is predominantly horizontal with some vertical component, which causes it to oscillate with a pattern that moves material. A retaining spring assembly at the back of the trough absorbs the shock load. All components including the drive motor are mounted on a rigidly constructed base frame.

Hot and abrasive materials can be handled
Cooling, drying, and dewatering operations can be done during transport
Scalping, screening, or picking can be done
Units can be covered and made dust tight
Simple construction and low headroom
Can be made leakproof

Oscillating conveyors are often referred to as a particular form of vibrating conveyor when they work with a relatively low frequency and a greater range of motion than would be normally used with a vibration conveyor.

This means that oscillating conveyor systems are utilized for the transmission of bulk commodities such as in the wood or waste management/recycling industries. These conveyors, for instance, can be used to carry wooden scraps upstream and transfer them to an outlet.